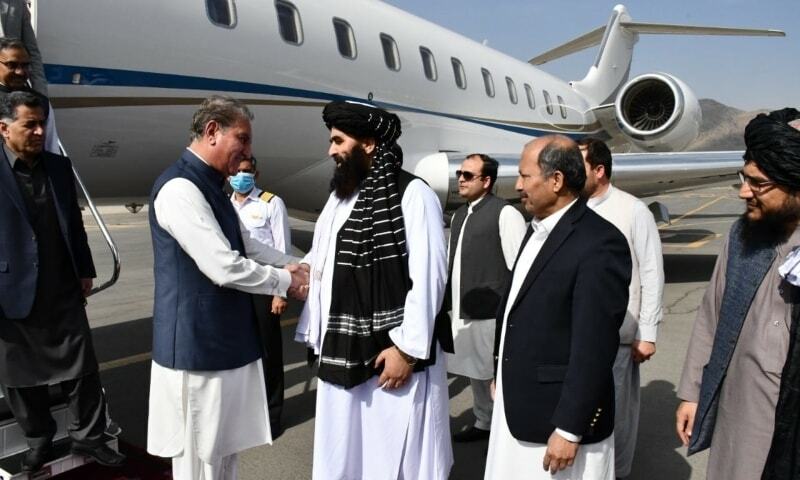 Foreign Minister Shah Mahmood Qureshi arrived in Kabul on Thursday, leading a high-level delegation to meet with Afghan officials and leaders on bilateral relations and ways to strengthen cooperation, the Foreign Office (FO) said in a statement.

In a photo released by the Pakistan Embassy in Kabul, Qureshi can be seen shaking hands with Afghanistan’s Acting Foreign Minister Amir Khan Muttaqi at an airport tarmac. In the background, Inter Services Intelligence chief Lieutenant General Faiz Hameed can be seen disembarking the plane alongside other officials from the Pakistani delegation.

“During the one-day visit, he will hold talks with Acting Foreign Minister Amir Khan Muttaqi and call on [the] leadership of the interim government in Kabul. He will meet other Afghan dignitaries as well,” the FO statement reads.

The talks will cover the “entire spectrum” of relations between Pakistan and Afghanistan with a focus on methods to deepen cooperation between the two countries in diverse areas, the FO said.

“Utilising the opportunity, the foreign minister will share Pakistan’s perspective on issues of regional peace and stability.”

The FO statement said that as a “close fraternal neighbour”, Pakistan had always stood by Afghanistan, mentioning a number of measures in this regard such as keeping border crossing points open, the institution of a facilitative visa regime for Afghan nationals and provision of humanitarian aid and assistance in the form of food items and medicines.

FM Qureshi’s visit comes while Russia is hosting the Taliban for talks in Moscow.

Attending the talks on Wednesday, Pakistan’s Special Representative for Afghanistan Ambassador Mohammad Sadiq emphasised the need for extending humanitarian support to Afghanistan, saying that the international community “must step up efforts” for the purpose.

Ambassador Sadiq conveyed to the other participants of the meeting, including a Taliban delegation, that peace in Afghanistan would benefit the entire region in terms of stability, secure borders, enhanced connectivity, return of refugees and countering terrorism, a statement issued by the envoy said.

He reiterated Pakistan’s firm belief that peace went hand in hand with prosperity and economic stability and highlighted that “Pakistan’s constructive role in [the] Afghan peace process is well-recognised and acknowledged by the international community.”