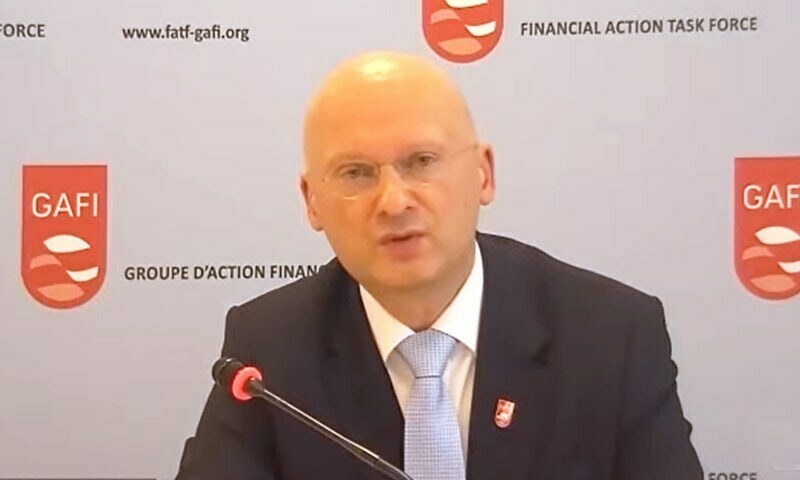 The Financial Action Task Force (FATF) announced on Thursday that Pakistan will remain on its increased monitoring list, also called the grey list.

Pakistan has been on the grey list, for deficiencies in its counter-terror financing and anti-money laundering regimes since June 2018.

Announcing the decision, FATF President Dr Marcus Pleyer said that Pakistan had to complete two concurrent action plans with a total of 34 items. “It has now addressed or largely addressed 30 of the items,” he said.

“Its most recent action plan from June this year, which largely focused on money laundering deficiencies, was issued after the FATF’s regional partner — the Asia Pacific Group — identified a number of serious issues.

“Overall, Pakistan is making good progress on this new action plan. Four out of the seven action plan items are now addressed or largely addressed.”

He said that this included showing that financial supervisors are conducting on-site and off-site checking on non-financial sector businesses and enacting legislative amendments to improve international cooperation.

Commenting on the action plan devised in 2018 which focused on terror financing, the FATF president said that Pakistan was still assessed to have largely addressed 26 out of 27 items.

“Pakistan has taken a number of important steps but needs to further demonstrate that investigations and prosecutions are being pursued against the senior leadership of UN designated terror groups,” he said.

All these changes are about helping authorities stop corruption, preventing terrorism and organised criminals from benefitting from their crimes, he said, thanking the government for their “continued strong commitment” to the process.

To a question regarding an Indian minister’s claims that the Modi government had ensured that Pakistan remained on the ‘grey list’, Dr Pleyer said that the FATF is a technical body and “we take our decisions by consensus […] so it’s not only one country that makes decisions.”

“Due to us, Pakistan is under the lens of FATF and it was kept in the grey list,” Jaishankar was quoted as saying while addressing a virtual training programme on foreign policy for BJP leaders.

Refusing to comment on the Indian’s minister’s remarks, Dr Pleyer said that the FATF consists of 39 jurisdictions and the decisions on Pakistan are all taken by consensus.

The FATF in its last session in June had kept Pakistan on the watchdog’s “increased monitoring list” till it addressed the single remaining item on the original action plan agreed to in June 2018 as well as all items on a parallel action plan given by the Asia Pacific Group — the FATF’s regional affiliate.

“Pakistan has made significant progress and it has largely addressed 26 out of 27 items on the action plan it first committed to in June 2018,” FATF President Dr Marcus Pleyer had said at a post-plenary presser.

He had, however, pointed out that the remaining item on financial terrorism still needed to be addressed which concerned the “investigation and prosecution of senior leaders and commanders of UN-designated terror groups”.

The FATF, after discussion, had decided to maintain status quo for Pakistan — countries in increased monitoring. It hoped the remaining action item would be completed before the FATF’s next plenary scheduled for October.

Shortly after the announcement, the then minister for industries and production Hammad Azhar had said that the APG had given seven additional action points under a parallel mutual evaluation mechanism under which Islamabad had largely completed 75 out of 82 action points.

Azhar had said Pakistan would complete within three-four months the only remaining FATF target on speedy prosecution of the UN-designated terror groups’ leaders.

He had said the government had set a target for itself to complete APG’s seven action points within 12 months — a target most jurisdictions achieve in two years.

Pleyer had made it clear that Pakistan’s delisting from grey list would not take place until both action plans were completed and the members then came to a conclusion that systems and efforts against financial risks were sustainable.

He had said the rules were very clear and equally applicable that jurisdictions under increased monitoring list had to complete all action points and fully address the risks.

Under the new action plan, Pakistan will have to address its strategically important AML/CFT deficiencies. These include enhancing international cooperation by amending the MLA law, demonstrating that assistance is being sought from foreign countries in implementing UNSCR 1373 designations and also that supervisors are conducting both on-site and off-site supervision commensurate with specific risks associated with designated non-financial businesses & professions (DNFBPs), including applying appropriate sanctions where necessary.

The new actions also require Pakistan to demonstrate that proportionate and dissuasive sanctions are applied consistently to all legal persons and legal arrangements for non-compliance with beneficial ownership requirements, show increase in ML investigations and prosecutions and that proceeds of crime continue to be restrained and confiscated in line with Pakistan’s risk profile, including working with foreign counterparts to trace, freeze and confiscate assets. Also, the government has to demonstrate that DNFBPs are being monitored for compliance with proliferation financing requirements and that sanctions are being imposed for non-compliance.